Home featured Osinbajo disliked me for revealing contract he got from FG –...

Ex-Attorney General of the Federation and Minister of Justice, Mohammed Adoke (SAN) under the administration of ex-President Goodluck Jonathan’s administration, said Vice-President Yemi Osinbajo seemed to dislike him after he blew the lid on the legal contract he got from the federal government years back off.

Adoke, a fugitive at large, alleged this in his newly published book titled, Burden of Service: Reminiscences of Nigeria’s Former Attorney-General, where he said he made the disclosure in an interview he granted This Day in 2016.

He said he may have riled Osinbajo after disclosing that the vice president benefitted from a $16m legal fee that saw the Federal Government recover $65m from indicted companies many years ago in the said interview.

“In that interview, I mentioned the names of the lawyers who got paid by Pfizer to include Chief J.B. Daudu, Prof. Osinbajo and a host of other Nigerian lawyers, including Mrs Mariam Uwais, now a Special Assistant to the President on Social Investment Programme in the Office of the Vice-President,” the embattled ex-minister wrote. 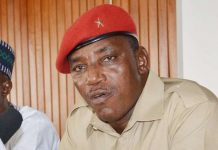 NFF has not given me ‘my house’ – Ex-minister, Dalung

I used to supply girls to a popular pastor – Cossy Ojiakor

Mbaka reacts to his alleged prediction on new Bayelsa gov

NEWS orijoadmin - February 18, 2020
0
The Economic and Financial Crimes Commission, EFCC, has arrested a 60-year-old fish-farmer, Muyiwa Otuyalo, for attempting to smuggle a substance believed to be hard...

NEWS orijoadmin - February 17, 2020
0
The Kabirus who lost one of theirs, Waheed, to police brutality has threatened to disrupt activities at branches of the Central Bank of Nigeria,...
Advertisement

Mbaka reacts to his alleged prediction on new Bayelsa gov