A housewife has slaughtered her husband in Tafa Local Government Area of Niger State after she discovered that her spouse, a mobile police officer was planning to bring another woman home as wife number two.

The husband, Sa’idu Ahmad, a mobile police officer attached to Mopol 45, Abuja, provoked his wife, Lubabatu Haruna’s anger when he surreptitiously plotted to have a new wife.

The deceased who was just promoted at work hatched the plot with his friend who was equally slaughtered by Lubabatu with the support of her younger brother, Basiru Haruna.

The suspects allegedly attacked Ahmad and his friend in the wee hour while they were sleeping at Sabo-Wuse in Dagiri in the couple’s house.

The deceased persons were buried the following day after their corpses, initially deposited at the Umaru Musa Yar’adua Hospital in Sabo-Wuse, were released by the police while Lubabatu and his brother have been arrested.

HOUSEWIFE ASSISTED BY BOYFRIEND TO POISON HER DISABLED HUSBAND 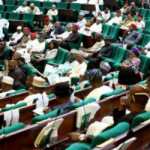