The Oluwo of Iwo, Oba Adewale Akanbi, has heaped curse on anyone who continue to pin the collapse of his marriage to his Jamaican wife, Chanel Chin, on him.

Following on from the monarch’s revelation, rumour started swirling around that he was at fault for the divorce, a claim he has come out to dispel it and sworn at anyone who the report of his culpability continued to gain traction despite his denial in a statement he released.

The statement read in part: “Regarding his marital issues now, I have this to say to you… if I ever did evil or show anything other than love in this my immediate past union, let God Almighty judge me and put the curse on my head and remove the crown from me.

“But if I’m righteous enough in this marriage, may God let me reign for long and always overcome all adversaries and calamities that may come my way. May evil befall the one that did evil to each other in the marriage. Amen. To all who choose to judge without knowing the truth, I forgive you and may God forgive you too, but from this moment on, if you judge me without knowing the truth, may the evil that was perpetrated against me be done to you and may your children experience what I went through in this past relationship of mine.” 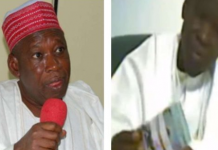 It’s natural to be a bit selfish – Ganduje

featured orijoadmin - January 26, 2020
0
The management of Michael Okpara University of Agriculture, Umudike (MOUAU), Abia State, has weighed in on the allegation of sexual harassment levelled against its Vice-Chancellor,...

featured orijoadmin - January 26, 2020
0
One of the children of popular trado-medical practitioner, Alhaji Fatai Yusuf, name undisclosed, has reportedly shared insight into event(s) leading up to the murder...