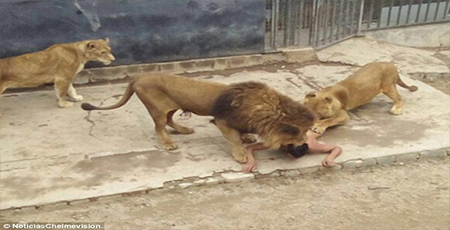 A man in Chile, South America, survived an unsuccessful attempt to feed himself to two lions in zoo and is being treated for injuries, Chilean radio Bio Bio reported.

According to Bio Bio, Franco Luis Ferrada Roman, 20, stripped himself naked and jumped into the lions’ enclosure at a zoo in Chile.

As stunned visitors watched, the lions immediately pounced on Roman and initially were somehow playing with him but they were gunned to death by the zoo keepers before they made a meal of him.

The director of the zoo, Alejandra Montalva, told local media: ‘We believe that this person entered as a visitor and paid for his ticket.

‘Later he trespassed into an area where the public are not normally allowed and we understand that he forced the roof of the lion’s enclosure.

‘It was from there that he jumped, took off his clothes and started to attract the lions.’
The zoo director said she was ‘deeply affected’ by the deaths of the two lions, a male and a female.

‘The zoo has an established protocol because people’s lives are very important to us.’

How Your Personality Can Affect Your Health

Man who fed himself to lions thought he was Prophet

featured orijoadmin - October 30, 2020
0
The Edo State Governor, Mr Godwin Obaseki, has explained the motivation that made him to join politics. Obaseki made this revelation on Thursday via a...

NEWS orijoadmin - October 30, 2020
0
Twenty-one persons many of whom were pupils of Presentation Nursery and Primary School, owned by the Catholic Diocese of Awgu, in Enugu State have...
Advertisement