A 75-year-old man, Ogueshi Nwoye (full name withheld) who lived at Ogbesuwe quarters in Asaba, Delta State has met his death while having a sex romp with a 21-year-old prostitute, a resident of the same area.

The prostitute who was simply identified as ‘Lady P’ was said to have a penchant for dating elderly men.

Sources said that Ogueshi Nwoye, one of her admirers, was challenged to a sex bout after parting with N5,000, a situation that led both into some rounds of sex, which left the man gasping for breath afterwards.

He slumped and was rushed to a nearby hospital by sympathisers, where he was confirmed dead on arrival.

Lasaco Assurance: Looking Good For the Future, by Rilwan Oshinusi

ENTERTAINMENT orijoadmin - September 30, 2020
0
A tug of war between Lagos and Ogun over the state winner of the 2020 edition of the Big Brother Nigeria reality TV show,... 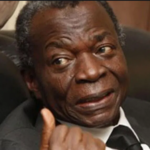 NEWS orijoadmin - September 30, 2020
0
Former President of the Court of Appeal, Justice Ayo Salami, has accused lawyers to the suspended Acting Chairman of the Economic and Financial Crimes...
Advertisement