lbrahim Olalekan, a member of the NYSC, who suffered casualty during Saturday’s governorship and State Assembly elections in Ondo State has been buried.

Recall that Olalekan, an ad hoc worker of the Independent Electoral Commission, INEC, died on the fateful day when a boat carrying him and some other electoral officials from Ese-Odo Local Government Area of the state, precisely Agadagba-Obon capsized.

The deceased who hailed from Ogun State and graduated from Offa Polytechnic was the only casualty with others escaping with various degree of injuries.

According to report, the late Olalekan was buried according to Islamic rite amid tears. 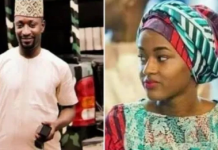 featured orijoadmin - February 25, 2020
0
The Oluwo of Iwo, Oba Abdulrosheed Akanbi, has eaten the humble pie and expressed regret at the action he took during a meeting of...

NEWS orijoadmin - February 25, 2020
0
The Acting Chairman of the Economic and Financial Crimes Commission (EFCC), Mr. Ibrahim Magu, has warned the public against the fraudulent activities of name-droppers...
Advertisement