Persons attending the same church with two of the three graduates of the Federal Polytechnic, Offa, who died in a fatal accident while travelling to Katsina State to participate in the mandatory one-year National Youth Service Corps scheme, have taken to the Facebook to mourn their demise.

Two of the deceased: Fakayode Oluwatosin Israel, and Akanji Abiodun Oluwatoyin were members of the Cherubim and Seraphim chapter of Offa Polytechnic and died on Thursday in the said accident which occurred at Mokwa area of Niger State when an articulated vehicle ran over an 18-passenger Toyota bus in which they were travelling in.

Their distraught friends and schoolmates took to Facebook to pay them tribute with a user, Atoyebi Damilola, posting: “Papa and mama died at the same time, Fakayode oluwatosin Israel, Akanji abiodun oluwatoyin. May God grant you eternal rest, Your memory will forever be in my heart. Can’t stop crying, thinking about selfless love you both share among church members. You both serve God diligently with your heart and soul.olorun isokan oooo we don’t deserve this in C&S unification Fedpoffa chapter. O’lord why.” 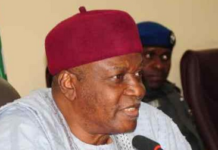 featured orijoadmin - August 11, 2020
0
The Presidential Taskforce on COVID-19 has described the ravaging disease as ‘not a proper pandemic’. The World Health Organisation, WHO, labelled the novel disease a...

featured orijoadmin - August 11, 2020
0
The Joint Admissions and Matriculation Board, JAMB, has announced its withholding of results of prison inmates, who sat for this year’s UTME at Nigerian...

HUMAN INTEREST orijoadmin - August 11, 2020
0
An Upper Shari’a Court sitting in Kano has convicted a 30-year-old man, Yahaya Sharif-Aminu, of blasphemy and sentenced him to death by hanging. Yahaya, who...
Advertisement