Senator Shehu Sani, who is in a mire of extortion scandal has accused the Economic and Financial Crimes Commission (EFCC) of doctoring the released audio of his phone conversation with his accuser, Alhaji Sani Dauda, the Chairman of ASD Motors.

Dauda had petitioned the EFCC, claiming Sani, who represented Kaduna Central in the 8th National Assembly, duped him out of $25,000 on the pretext of helping him to reach out to the anti-graft agency’s boss, Ibrahim Magu and Chief Justice of Nigeria, Justice Tanko Muhammad.

The petitioner who has a run-in with the EFCC and has a case before the court said the Senator swindled him out of the said sum under the guise of sharing the money between Magu and Muhammad.

However, Sani had returned the money and debunked Dauda’s claim, insisting it was all about a car transaction gone awry.

The latest in the faceoff was the emergence of audio of an alleged phone conversations between the duo made public by the EFCC.

Faulting the audio in a statement his Special Adviser, Suleiman Ahmed released, the embattled senator said: “There was nowhere the audio indicated that Senator Sani was given money. The $25,000 in the tape was the amount the senator paid for a Peugeot 508 of which proforma invoice was given as evidence to the EFCC.

“The tape borders on Shehu Sani calling on ASD to support his political ambition and telling the audience the political persecution he was facing under Nasir el-Rufai and how hired assassins were sent after Sani.

“In the audio, it was Sani, who was making statement to give ASD money to purchase a car at his shop and was never for bribe.

“Almost 70 per cent of the content of the audio has been tampered with, and nowhere in the audio was it proved that Sani was given money to bribe the Chief justice of Nigeria (CJN) or EFCC officials. We shall release our full version of all the conversation when the matter goes to court.“The EFCC/accuser audio is a duet of misleading and misinforming rhythm and conversation. We reject the EFCC Hausa recording studio work of fiction.” 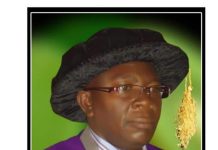 Watch video of Akindele in court as lawyer reacts