Ex-Kwara lawmaker, Engr. Shehu Sulyman Warah is enmeshed in a paternity scandal as a 23-year-old final year student of Federal College of Agric, Akure, (FCAA), Sola Warah, claims he is his biological father.

Sola told OrijoReporter that his mother, Hafsat Ishola had a very passionate romantic involvement with the former Kwara lawmaker back in the early ’90s while he was an undergraduate of University of Ilorin, and she was a secondary school student, adding that their tryst led to his birth in 1992.

Born and bred in Imure in Ekiti where his maternal grandmother hails from, Sola said it came as a rude shock to his maternal family when his alleged father later on denied fathering him.
According to the FCAA undergraduate, he made several overtures to his alleged father, a
Saraki’s acolyte but without success.

Things however got to a tipping point in the paternity scandal rocking Engr. Shehu Sulyman Warah(pictured first right) recently when Sola(pictured second right) insisted on a DNA test, which was marred by suspicion.

The young man has petitioned the Medical and Dental Council of Nigeria, (MDCN), and the Legal Aid Council over the DNA Test he and his alleged father took at Harmony Advanced Diagnostic Centre, Ilorin, alleging there was a conspiracy between Engr. Warah and the management of the diagnostic centre to manipulate the result(posted right).

The petition reads in part; “On the 3rd of September, 2015, myself, my mother and two other witnesses from my end as a party, my alleged father, Engr. Shehu Sulyman Warah who has denied my paternity for 23 years, his new wife and one Mr. Idris another party as his witness were present at the Harmony Advanced Diagnostic Centre (HADC) for a DNA test to determine my paternity that has been in dispute.

“The samples of our saliva were taken (myself and Engr. Sulyman Warah) and the Doctor on duty immediately sent for a courier service rider to dispatch the specimen to Lagos for a laboratory test and that the result shall be opened in the presence of all the witnesses in a few days time. We all departed in good faith.

“I was called to show up at the centre and all the parties involved, we showed up and my grandfather Alh. Ajamajebi who was not initially present showed up but one of my witnesses could not be present. In line with our earlier agreement, I taught the result will be brought in sealed but the Doctor merely read from his laptop a mail sent to his e-mail box.

“This negates our earlier agreement, there is a foul play, we left our e-mail behind on the first day, no message(s) was sent to me.”

Efforts made by our correspondent to hear Engr. Shehu Sulyman Warah out on the paternity scandal trailing him as at the time of publication were futile.

Coronavirus: Shut down NASS, use their budget for masses – Pat Utomi

COVID 19: We have produced a million chloroquine tablets – May & Baker 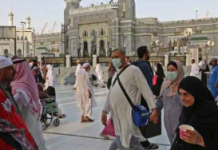 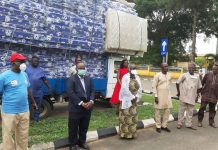 featured orijoadmin - April 4, 2020
0
Two soldiers who are seen in a viral video threatening to deal ruthlessly with residents of Warri, in Delta State including infecting women with...

Coronavirus: Shut down NASS, use their budget for masses – Pat Utomi

NEWS orijoadmin - April 4, 2020
0
Founder of the Centre for Values and Leadership (CVL), Prof Pat Utomi, has advised the federal government to shut down the National Assembly in the...

Coronavirus: Shut down NASS, use their budget for masses – Pat...