The National Chairman of the All Progressives Congress (APC), Comrade Adams Oshiomhole said the Peoples Democratic Party (PDP) presidential candidate, Atiku Abubakar, has conceded defeat ahead of the Saturday’s election.

Oshiomhole stated this against the backdrop of the recent alarm raised by Atiku. The latter had said the ruling APC contrived a plot to rig with smart cards of different quality.

“So, if you are in the South-south, South-east and North-central, you are likely to get your card readers to be slowed by those APC operatives.

“If you are from the North-west, North-east or South-west the tendency is that they will use these machines to fast-track the readings of your card readers, so that many of their supporters can vote while disenfranchising the other three zones,” the former Vice President alleged at the PDP 84th National Executive Committee (NEC) meeting held at the party’s headquarters in Abuja.

Reacting to the weighty allegation, Oshiomhole dismissed it saying going by it Atiku has conceded defeat.

“From the response of the PDP candidate, it is clear that they have already conceded defeat. First, he claimed that he has two stronghold which he identified as Southsouth and Southeast. That is not true because I come from the Southsouth and we are not voting Atiku. We have since dismantled the PDP machine in Edo state and Edo is the heart beat of the Nation.

“Even If you take the statement in its face value, if Atiku concedes that out of six geopolitical zones, he has support not in his own zone, but Southsouth and Southeast, the voting population in these two zones are not enough to deliver the presidency to any candidate in Nigeria,” the former Edo governor said. 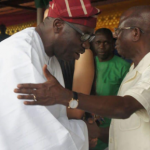 featured orijoadmin - June 4, 2020
0
Edo governor, Godwin Obaseki, said he dedicated eight years of his life to be of service to his predecessor, Comrade Adams Oshiomhole. The 62-year-old was...
Advertisement